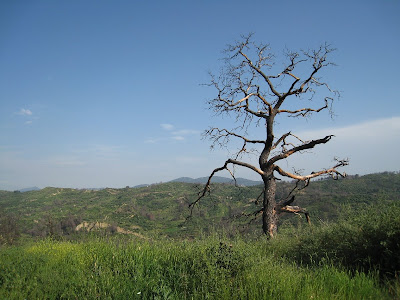 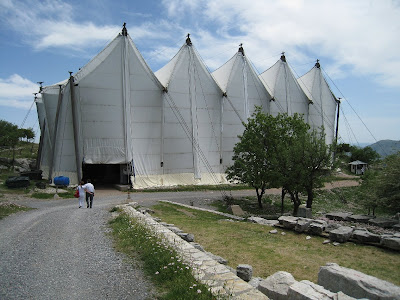 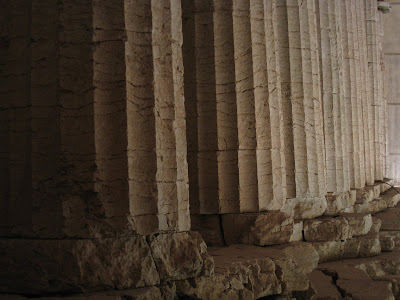 Greece is littered with countless archaeological sites. On the roadsides we constantly see signs telling us of archaeological points of interests just off the road. There are so many of them that mostly we just ignore them for fear of getting nowhere. However, there are a few things one must stop for and the Temple of Apollo Epikourios on the beautiful meandering road between coastal Tholo and mountainous Karitena is described as one of them.

Built by Iktinos the architect of the Parthenon and the beautifully preserved Temple of Hephaestus in Athens, this temple had the promise of a remote mountain-top location to add to the impact. Being the second best preserved temple in Greece and coupled with an arduous mountain climb it sounded like a cycling must see.

The ride was terrific, the road from Tholos runs a gentle uphill course along the edge of the burn of the forest fires that devastated the region around Olympia 2 years ago. It gradually pulls away from this zone and sharply heads upward through intensely shepherded mountains to a stark mountain top where for several kilometers you watch a white circus tent growing as you approach your destination. The visual reward for all your hard work is disappointing. The temple, which has survived in terrific condition due to it's distance from any sizable population has been shrink wrapped to protect it from the elements. The effect is absurd and impossible to appreciate.

The brief write up at the sight extolling the usefulness of the protective tent points out that the impact is only aesthetic, which, to me, seems pretty damn important given that aesthetics was one of the main reasons for choosing an architect like Iktinos to design and build such an impressive temple in such a visually incredible place. In it's current state it is impossible to get any kind of feel for the feat that was accomplished here. I'm sad to say that the Greeks have really blundered on this one. Please free the Temple of Vasses!
Posted by Alexandra at 12:43 PM