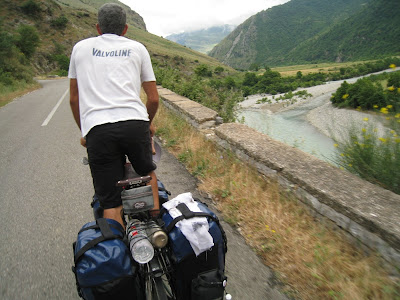 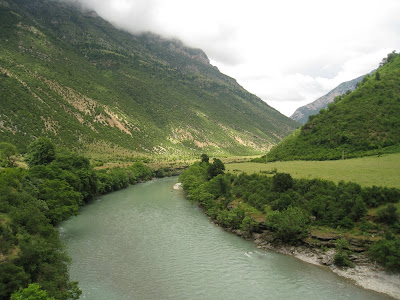 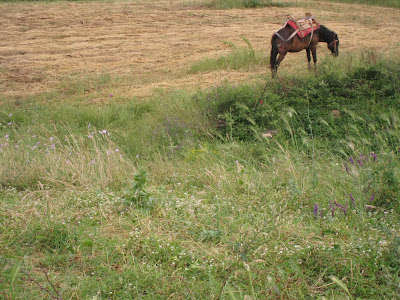 Reluctantly leaving beautiful Gjirokastra we continued along the Drinos valley, marvelling at its impressive number of gas stations and sigh inducing mountain backdrops. As drizzle turned to downpour we decided to escape the rain and satisfy our hunger. An ugly little restaurant with a TV full of Albanian music videos had hairy mutton ribs and homemade yogurt on offer. Somewhat disabled by our lack of Albanian language skills, we ended up with sizeable orders of each. We munched on greasy ribs and yogurt while waiting for the rain to pass.

Further down the road, just past the gushing spring of Tepelene, we were long at last off the gas station lined freeway and into the more humble Albania we expected. Cars dropped away to a mere trickle. The number of shepherds doubled and road quality, while still generally good, varied considerably. The mountainscapes closed in around us as we cycled into the Kelcyre gorge.

In the town of Kelcyre we stopped to inquire about the road to Berat which appeared on our map as well as on a road sign in the centre. We were met with confused looks and through a mixture of Albanian, Greek, Italian, French, and traveller's charades we were told that the road was impassable. I pointed to a nearby dirt side street asking if it was like that – yo, non, no, oxi. Big boulders lay in our way (described with a pantomime of a man clumsily picking up and carrying a very large boulder on his belly and hips), so we either had to go back to the main road or find a different destination. Later reading of the Lonely Cyclist's blog of cycling adventures in Albania, we learned that it has been done by cyclists, and it was indeed very difficult going, In the end, we opted for a turn that took us to Korce and over the highly talked of spectacular Barmash Pass.

Alongside the fields of hay we raced the rain that chased us into nearby Permet. 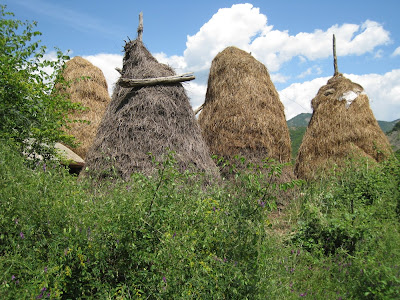 Posted by Alexandra at 3:14 PM