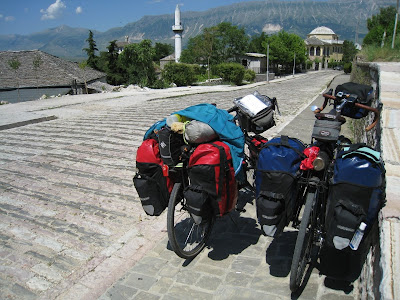 Uncertain of how things would be in Albania, we bought some rice and lentils and canned foods to carry in our panniers in case we found ourselves stranded for food. We also stocked up on water because we heard the water was unfit for drinking and we had no idea how often we would be able to buy water. There was also the question of money. We read that money changers in the street are perfectly legal, but given that we were all returning to Greece nobody wanted to change their euros especially since the towns on the borders aren't big enough for ATMs. So, we needed a bank machine to pull out some leke - on we rode into the Albanian Drinos valley... 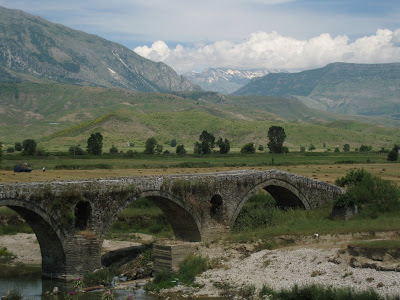 ...and a more beautiful highway than anything we had seen yet in Greece. Beautifully paved, big shoulder, with a downward grade just gentle enough that you still have to do a little work to move ahead, but you are left feeling like you are powerful enough to ride clear across Albania in a single day. Of course that feeling may have also come from the giant view we were moving through. A beautiful wide valley lined on either side with a mixture of fierce stony mountains and their accompanying stone villages clinging to the folds leaping away from both sides of the river valley. Down the Drinos valley we slid into a much more modern Albania than we expected. 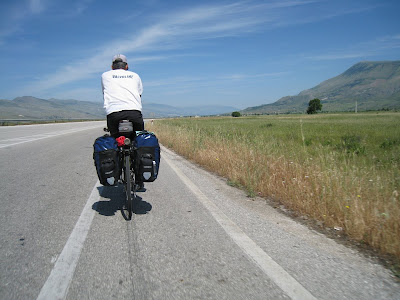 When we stopped to fill our wallets with Albanian leke from an ATM at one of the very modern and overabundant roadside gas stations, we were invited to an espresso by the manager. In Albania, the Greek affection for Nescafe frappe has yet to beat out the influence of the Italian tradition of the espresso. I'm not much of a coffee drinker, but the Greek frappe is a phenomenon that has me entirely bewildered. The insta-frappe is simply criminal in a culture with such a long history of coffee appreciation.

With espresso, a tailwind, and a lovely downward slope we were in Gjirokastra negotiating the cobbled gravity defying climes of the city's Ottoman quarter in no time. Naturally, between the violent rush of Mercedes' and the slippery cobbles, the hotel we were directed to proved difficult to find. We were all too focused on staying upright to notice the Kotoni B&B sign until the third pass. 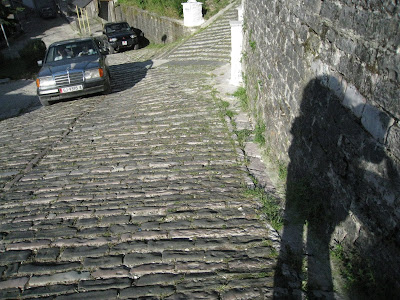 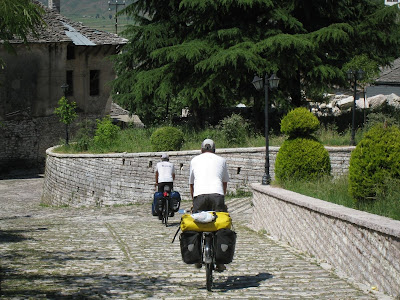 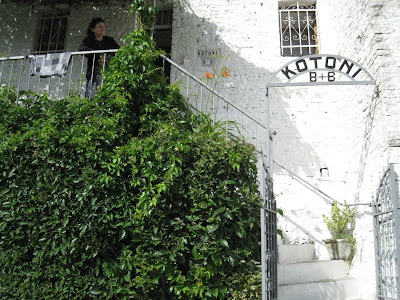 Posted by Alexandra at 1:18 AM

an Excellent job , great posting for this site ,lovely and Faboulious,Awesome