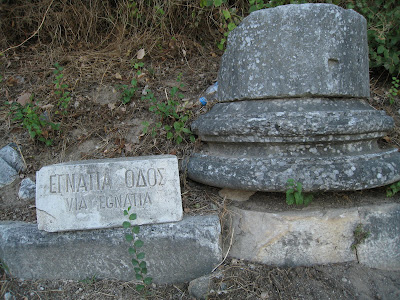 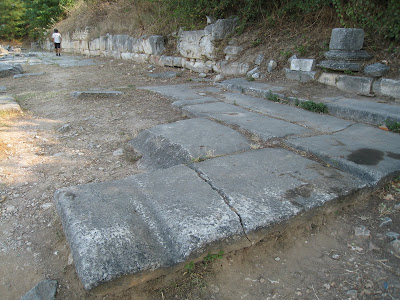 The road I have been the most thrilled to see was the original Via Egnatia which was built in the second century BC to connect ancient Rome to less ancient Byzantium. This portion shown here was excavated in ancient Phillipi. If you look closely you can see the grooves worn into the stone slabs by chariot wheels.

Standing in the middle of this road one can easily imagine Mark Anthony and Octavian, after the assassination of Julius Caesar, pursuing Cassius and Brutus along the Via Egnatia to their fateful battle at Phillipi in 44 BC.

It is also remarkable to see the mixing of Roman and early Christian motifs. With the arrival of St Paul the apostle on the shores of Macedonia in 49 AD, Phillipi was the first European city to convert to Christianity. To wander the present day site is a historical feast.
Posted by Alexandra at 4:58 AM