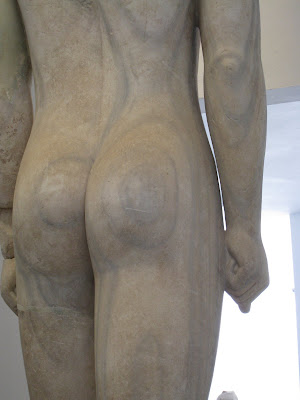 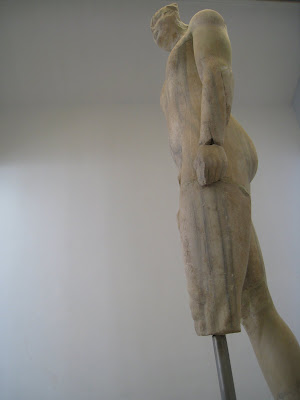 In green, green Samos between 538 and 522 BC there reigned a man named Polycrates. Now good ol' Polycrates was a bit of a megalomaniac. On the sight of Hera's rumoured birthplace he built a temple 4 times the size of the parthenon and adorned it's road with at least 6 of the largest kouros statues known in Archaic Greece. These were no regular statues, they stood 5.5m high.

The kouros that stands in the archaeological museum of Samos is a massive sight to behold, but most remarkable for me was how beautifully the veins of the marble cooperated to highlight the contours of the hamstrings, glutes, lower back, and elbow of the statue. If this guy was ever painted, it must have been a sad day when that beautiful veining was covered up, not to mention the sadness of the day these colossal fellas were knocked down, broken up, and carried away to incorporate into the walls and steps of people's homes and public works. imagine that! this guy's parts were found all over the hellenic ruins of Pythagorio. Back then, people were a little better with the whole reduce, reuse, recycle thing.
Posted by Alexandra at 1:21 AM