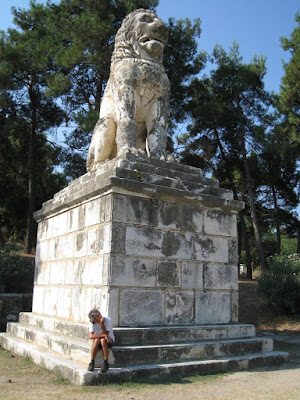 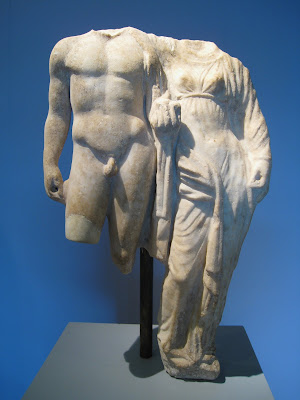 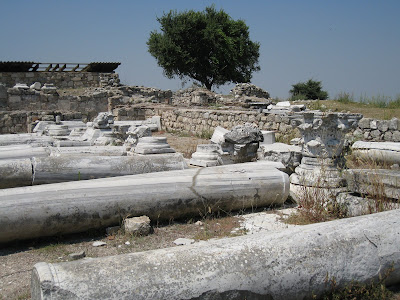 Ever heard of Amphipolis?

The Strimonas river valler threw our map into a tizzy. There were no roads where webs of roads were indicated on our map. For forty extra kilometers we cycled south towards the coast when really we wanted to cross the damn unbridgeable river and get our asses to Kavala. Asking for help we kept being directed to keep straight and turn left at the lion. The lion was where we could cross the river.

Well, some lion it was! Just sitting there being all unexpectedly HUGE! Our guide book made no mention of a gargantuan lion. It stopped mentioning anything at all back in Pella and, in fact, had little to say about the rest of our mainland trip. So, I buried the guide at the bottom of my pannier and we cycled on. Looking for directions we found ourself at the site museum for ancient Amphipolis.

Amphipolis got it's start as a satellite Athenian city. It served as a fortification to block invading Persian troops and, most importantly, to supply Athens with a steady supply of silver and gold from the neighbouring Mt Panageum. Amphipolis later supplied Alexander with many of his commanders (the lion is rumoured to be the tomb of one such commander) and it was also the launching point for Alexander's ships. With the rise of the Romans, the Via Egnatia transportation route passed through here on its way between Rome and Constantinople. The Byzantine Empire also outfitted her with some lovely pebble mosaics which remain buried on-site.

The things you find when you put the guide book away and let fate take you where it may....
Posted by Alexandra at 3:53 AM