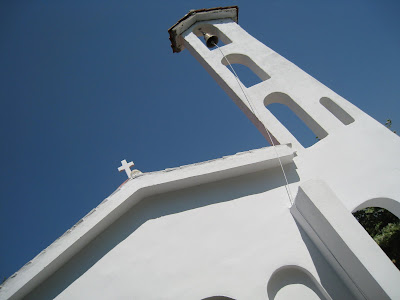 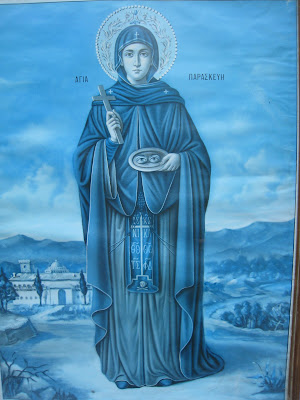 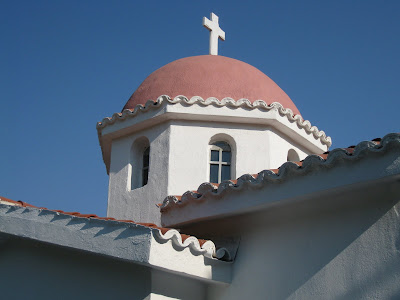 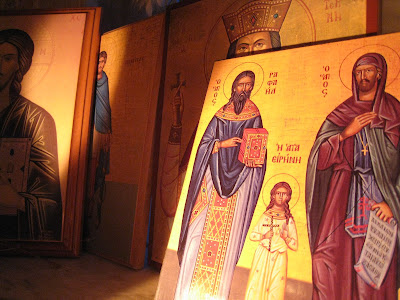 The first time Basil came to a halt outside a tiny whitewashed roadside building I was somewhat annoyed at the inconvenience of having my beautiful (and much deserved) wide open mountain descent so suddenly interrupted. I was also puzzled because Basil is not one to drag me around showing me architecture and is even less likely to stop to inspect a building that comes with any crosses attached. Intrigued, I hopped off my bike and followed him in to the most unexpectedly miniature and fully byzantine place of worship.

The rich colours of the gilded interior and the somber faces of the orthodox faith's endless team of saints blazed forth like found treasure when the door to this humble building was opened. It was impossible for me to imagine how such an insignificant and out of the way place could be so lovingly maintained. When Basil told me that Greece is covered with such places I was instantly in love with this aspect of the Greek Orthodox faith.

We have found refuge at dozens of tiny Greek Orthodox churches all over Greece. Opening the doors of such places is like peering in to a stranger's jewelery box. Each one is uniquely beautiful and full of stories and sentimental attachment that will take a lifetime for me to even begin to understand. Slowly I am learning their stories and for now I will begin with the story of Pareskevi - Saint Friday.

Pareskevi was born in Rome in 140 AD to wealthy Greek Christian parents. She was raised in a very loving and charitable home, but her parents died when she was twenty. With this turn of events, she donated most of her parents wealth to the poor, scorned many offers of marriage and devoted herself to teaching the way of Christ. Now, this was not a popular choice at this time as followers of this new faith were heavily persecuted. With this choice, death imminent for young Pareskevi, but on she trudged.

Captured and tortured several times, her seeming immunity to the pain of her torture won many converts. On one such occasion, she was accused of using witchcraft to cool the vat of boiling oil and tar she had been lowered into. Her response was to fling a handful of the boiling liquid at the emperor Antonius blinding him. She stepped out of the vat and proclaimed that only the Christian God could cure him and his sight was instantly returned.

Astounded by the miracle she was freed and Christain persecution ended for the remainder of his life. She was eventually beheaded under the reign of Emperor Marcus Aurelius and today is considered the healer of the blind.

We discovered the small church (pictured above) devoted to her by a poor and elderly woman after having several visions of Pareskevi. She was told that if she dug next to the plane tree at this location she would find water and that she should build a church next to this spot. With it's delicious running water, view of the sea, and quiet setting, for us, it proved to be an irresistible place to stop and spend the night.
Posted by Alexandra at 10:47 PM