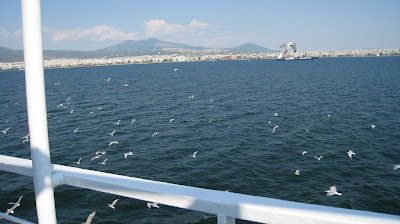 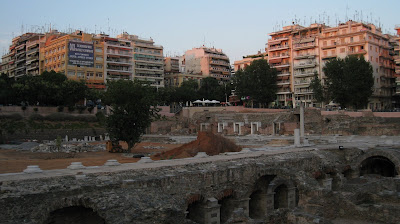 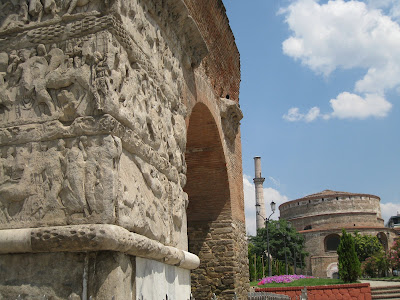 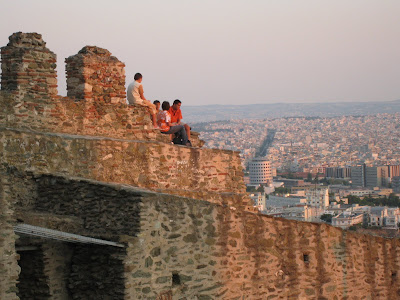 Our ferry slid past the watchful presence of Mt Olympus towards the sprawling white mass of Thessaloniki nestled at the top of the Thermaic gulf and opening into the popular destination of the Halkidiki peninsula. My leg muscles twitched at the thought of cycling what looked to be at least a day or two of relatively "flat" terrain. An entirely different Greece if not just for this. In Thessaloniki waited my pal Elisabeth with a fresh new derailleur hot off the plane from Denver. Thanks Elisabeth!

Up to this point Greece felt to me to be a conflicted place wanting to seem more west than east but somehow more east than west. In Thessaloniki the whole thing blew open and what lies at the heart of what is Greece surged up to confuse me even more than I already was. So much of the western opinion of what is Greece is in her ancient culture, but so much of what is in fact modern Greece is in her Byzantine and Ottoman past and is infinitely more fascinating.

A sizeable and little talked about miracle took place in Thessaloniki, Muslims, Jews, and Christians co-existed in relative harmony from the late 15th century to the early part of the 20th century. The Ottomans welcomed exiled Spanish Jews who were being persecuted under the Spanish Inquisition to Thessaloniki. This trio lived and worked together until the crumbling Ottoman empire lost control of Macedonia and the German invasion of the Second World War sent most of the city's Jews to Auschwitz.

One of my favourite things about travelling in Mexico is unravelling the places where the cultures of Mexico and the culture of Spain meet. I love discovering where they've clashed and where they've fused and where they have created something entirely new. In Greece, Thessaloniki remained a part of the Ottoman empire into the 20th century and the feeling of the co-existance of cultures still remains. Where other areas we've visited have worked hard to erase their Ottoman past, here there remains an undercurrent. As cosmopolitan as Thessaloniki may be, there is a distinctly eastern flare. It forshadows the future of our ride as we head into increasingly muslim Thrace.
Posted by Alexandra at 8:38 AM

Hi!
I live in Brazil and like so much your blog!
The pictures is beutifouls
my blog is www.cdcamutacao.blogspot.com
Kisses