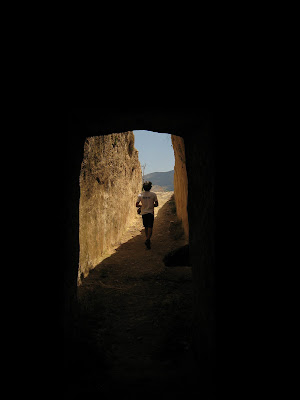 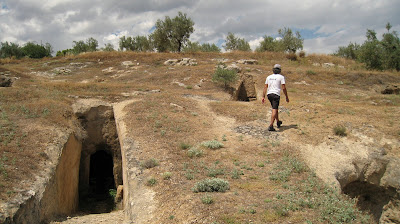 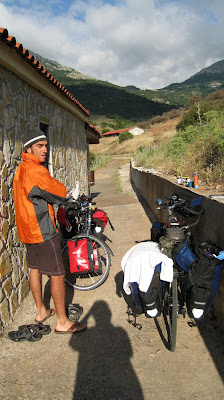 Archaeological sites in Greece are either heavily protected or entirely abandoned. We were quite disappointed when Mycenea closed up shop at 3pm not allowing us time to visit the Treasury of Atreus where the Mask of Agamemnon was uncovered along with heaps of other incredible gold pieces. The treasury is a 'tholos' style tomb dating back to the 16th century BC. What the heck is a 'tholos' style tomb you ask? Exactly! I wanted to know too. We picniked in front of the gate and contemplated jumping over the fence, but decided against it. I didn't want to see Basil sold into Greek military service.

Well, wouldn't you know it if the next morning, while filling up our water bottles at one of those lovely public fountains, one of the villagers mentions the 'tholos' style tombs a kilometer up the hill. Huh? I'd never read about the tombs of Aidhonia. Aidhonia wasn't in my guide book. The man assured us that most of the Mycenaean gold came from these tombs. So, there it was, 7 or 8 tombs cut into the side of the hill completely open - no fences. It was as if the archaeologists had walked away just yesterday.

Sixteenth century BC, think about that. It is very unsettling to stand in a room surrounded by open 16th century BC graves. I'm always sad to think about ancient people's bones all numbered and laying in a box in a museum somewhere. Part of me wonders if maybe the bones should be put back into their graves and the tombs resealed.

Down the road, we slept in our own 'tholos' style tomb wedged rather narrowly between a tiny church and a stone wall above the village of Skotini.
Posted by Alexandra at 9:03 AM

Who's that creepy lookin' dude in the orange jacket?

Oh, that's just a little something that i dragged out of one of the tombs. I think he looks pretty good considering how old he is.