Not so sweet spot 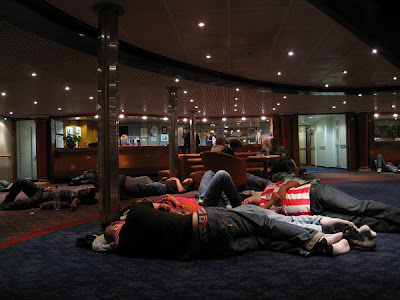 It was evening and I was pretty sure we had located the sweet spot for travelling deck on the ferry from Iraklio to Athens. We had arrived an hour and some before departure and so we had plenty of time to scope out the ship and find the perfect sleeping cove. Sofas, sheltered benches, and soft carpeted areas underneath stairwells, in quiet alcoves, and in unobtrusive sections are snatched up fast - so we had to act decisively.

Basil located a nice, quiet, dim spot under the two staircases in the main lobby. We rolled out our sleeping bags and mattresses to claim our place and we retired to a couch upstairs with a view of our gear. In no time, territorial Basil was sprinting down the stairs to hurl Greek insults at a burly group of young men who were standing on our stuff and looking like they might get comfortable. Basil snarled the intruders away and having reclaimed our turf, we sat and waited. Word circulated that the ship would be a hour late in it's departure because a football match had gone overtime and we were waiting for the team.

A little peeved, I settled in with an eye on the door and prepared to at least have the pleasure of feasting my eyes on the arrival of a pack of athletic bodies.

I was not to be satisfied. As the numbers crossing through the doors increased, so did the size of the waistlines bound in tasteless red football wear. I was confused and angered. I'm not sure where my head was, but, of course we weren't waiting for the athletes, we were waiting for the fans, the spectators! Now, while Greeks are no English hooligans, let me assure you, the arrival of the spectators of a Greek football game is no feast for the eyes - or the ears.

Our pleasant ship turned unpredictably rowdy, we were now an hour and a half late for departure, the lobby was full of loud, drunken, macho men dropping food wrappers and looking to bed down a little too close to us for my comfort. I was not happy that this was eating in to the early morningness of our bike ride across traffic congested Athens. So, I snapped at a particularly surly gang who decided that "next to my pillow" was a better location for their shoes than "next to their own pillow". Having defended our home, I slept well and then charged across Athens in record time - even with traffic.
Posted by Alexandra at 8:25 PM